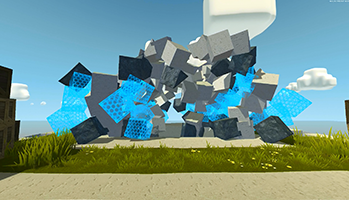 Cutting is a game mechanic in Block N Load. It was named this way by the Beta community.

Cutting is the act of disconnecting a group of blocks from the map, which basically makes it float. Because they can't float (without anchor blocks) they will fall down and the gained resources will be divided over the entire team. The team can gain up to a maximum of 1000 bricks each from a cut and even cutting 1 brick will be divided over the team. If the entire team gets 500 or more resources it will show up in the middle of the screen but as said before even below 500 the resources are split.

What are anchor blocks?[]

How are the resources gained being calculated?[]

The exact formula for calculating this is not know. Though as a rough indication you can take every block and the resources it gives and add them all up. Then divide this number the amount of people on the team and cap it at 1000 max. Again this isn't the formula used for the game but it gives a rough idea.